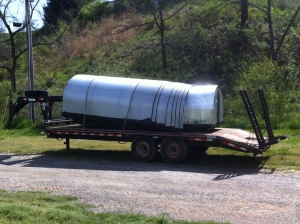 That’s what I imagine the guy said when he saw our trailer, loaded down with our brand new hog huts, and at the time, connected to our truck, parked in the lot this guy happened to pass through.  And I imagine that was the only thing on his mind (and $$ signs in his eyes) when, in broad daylight, he smashed the window, pulled out the ignition column, revved it up and drove the whole rig out of the lot.

Lucky for us, a) scrap yards tend to be closed on Sundays, and b) most opportunistic thieves often aren’t thinking crystal clearly.  And so, after meeting with the police, Graham and his buddy drove around the neighborhood and spotted the “hidden” truck (without trailer) in a lot ten blocks from where it was stolen. When the cops arrived, they found the trailer unhitched behind some tractor-trailers, hog huts and all.  And we consider ourselves crazy lucky.

A few lessons learned here: 1) drive home as quickly as possible when hauling a load of metal (though it was really just in the wrong place at the wrong time), 2) comprehensive insurance is probably worth adding to car/truck policies…

A couple weeks ago, Wendy came down from doing chores and told Graham… “so… #207’s bagged up.”  #207 is one of last Spring’s lambs. She was supposed to be in the midst of her first breeding… not a first lambing (bagged up means her udder was full).  It seems the ram get to the wrong field at just the right time, in November, and so last weekend, during evening chores, here’s what we saw: 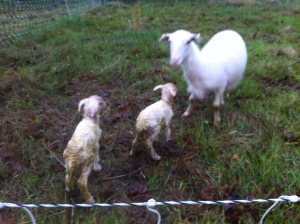 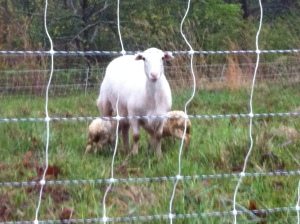 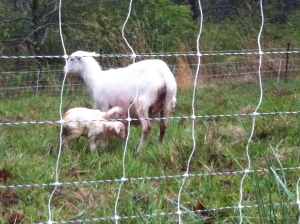 Photo quality isn’t great: Sorry; it was pouring down rain. That’s why they look a little glum.  They’re also brand spanking new in these pictures… not even totally cleaned off yet.  Lambs certainly aren’t that bad a surprise! She’s a young mom, but not crazily so, and we’re lucky that she’s a good one: attentive and able to keep track of them in all the tall grass we’ve got! Babies and momma are doing well after their first week.

Goodbye Marvin, Hello Jack! We got ourselves a new boar. He’s a bit prehistoric looking, but he’s a good-looking registered Hereford who’s proven.  Why did we get him, you ask?  Because Marvin wasn’t doing the one job he’s assigned to do (is it really so much to ask?).  We had several gilts and sows come back into heat for two, even three, months in a row.  Boars really aren’t supposed to “miss.”  That, and he had arthritic back legs, even though he was only two years old.

We’re happy to report that Jack seems to be getting his job done without complaint!  The ladies were a bit intimidated by him at first, but they’ve been going through phases of being head over heals in love… for three days at a time. He’s way more impressive and intimidating than Marvin was: good traits for a boar to have.

And now, we’re starting a new section of our farm updates, the Meet Your Meat Series.  It seems appropriate for Part 1 to be about the product with which we started, and one that we just processed our first batch of the season last week! 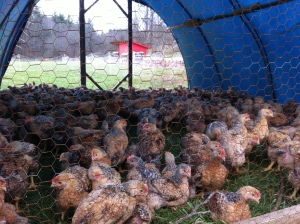 We raise all of our animals on pasture because we want them to be able to exhibit their natural behaviors so they’re happier and healthier animals.  Our Red Broilers spend their first three weeks in our brooder before moving out to our pastures, spending their days in the sunshine, foraging for insects and worms and taking dust baths.  We move them to fresh grass daily, which not only allows them to forage in brand new grass, but gives them the chance to eat the parasitic worms that could harm our sheep, while leaving behind just enough fertilizer to help our pastures thrive!  Unlike conventional birds, which are typically fed medicated feed from day 1, we never give our chickens any meds.  We know that a bird that’s well fed and watered and living in a clean environment, shouldn’t get sick. In fact, we’ve only had one sick chicken in the two years we’ve raised them!  We’ve lost some to predators and smothering when it’s cold, but only one to illness!  So, you can rest assured that you’re eating an all-natural, healthy product: a bird that had a happy life, while improving our pastures’ health by doing what it does best, being a chicken.

Why Red Broilers, over other breeds of meat birds?  Primarily, because they have the best flavor and texture, but there are reasons for that! Red Broilers were developed in the 1960’s as ideal chickens for pasturing.  The most popular meat bird, the Cornish-Plymouth Rock Cross, was developed for its very rapid growth rate; conventionally raised Cornish Crosses can reach a market weight of 4-5 pounds in as little as five weeks, which, while good for mass production, leads to skeletal problems, lameness, and low muscular development, which we think accounts for the decreased flavor in their meat.  Our Red Broilers, on the other hand, grow more slowly, reaching market weight after 9 to 11 weeks, which is less taxing on their bodies, and allows them to be more active.

Animal welfare is our #1 objective at Dry Ridge Farm; we’re proud of the way our animals live out their lives here, and we think you’ll notice how a healthy, active life improves the flavor and texture of all of our products!