June’s started off splendidly, with the perfect combination of rain, sunshine, and heat, for our new lambs to frolick in bright green pastures, our garden to pump out vegetables for market, and our chickens to eat up all the insects and flies (and ticks!) they could wish for!  Amid the Spring thunderstorms and increasing heat as we ease into summertime, we’ve been busily building infrastructure, welcoming new members of our animal families, and hocking our products to chefs and customers at market!

Our last post to the website left us in the midst of lambing season. Now, we have 26 new lambs, split exactly in half with little rams and ewes.  Our first lambing brought with it our first two bottle babies and our first black sheep to the farm!  Both of our bottle babies were one of a set of twins.  The white one in the picture below was born to a sick ewe who ended up, despite treatment for pregnancy toxemia and a retained placenta, being our first loss to illness on the farm.  Our ewe didn’t form a bag and so “Micro,” as Graham’s taken to calling her, simply couldn’t feed off her momma.  Her twin didn’t make it through birth, and we figured that our little 2 pound lamb probably wouldn’t make it long.  Despite her shaky start, she’s now thriving, and I have to admit that I’m happy she has another rejected lamb to hang out with!  Our dark brown bottle baby’s mom simply decided she had enough with one lamb and refused to entertain the idea of two babies nursing at the same time, so he joined Micro in a stall of our barn for three-times-a-day formula feedings.

Laying down, Micro was about the size of the 16 oz. bottle with which we fed her (no, she wasn’t drinking Fanta; they just make lamb nipples fit conveniently on standard bottles).  The brown lamb, #205R, was in far better health and at least twice her size at birth, when she was already two weeks old.  Since then, they’ve balanced out a bit, in part due to our first serious medical issue on the farm with #205, who came out of the stall at feeding time looking about as wide as he was long, round as a balloon and looking about ready to pop. Bloat is a serious concern with sheep, who can die of the issue (yes, cause of death: being gassy).  He didn’t respond well to attempts to get him to burp (with the help of oil, water, and baking soda) or to intubation, so with our first case of bloat, we had to go to the last resort. Luckily, Graham had read about poking a needle with an empty syringe into the rumen instead of cutting it, which would leave a far bigger wound, so we went the needle route. I held him, Graham got the needle in the rumen, and he literally deflated like an inflatable toy with a hole poked in it.  Air came out of him for a good two minutes and you could see him gradually deflate to normal size!  He’s doing fine now, but his set back means that Micro isn’t quite as small in comparison as she used to be.  Because everyone should have a chance to watch lambs bouncily run around, here’s a super quick video for your viewing pleasure.

I’ll keep the rest of this update short and sweet.  Below is our first black sheep, unfortunately a ram, so will not remain on the farm as part of our breeding stock.

And our two pregnant girls moved in (we’re still waiting impatiently for the piglets that should arrive any day now!)

Two of our rabbits had great new litters, our buck’s first babies, to which he contributed the gray speckles.

We’ve got our second batch of chickens at market now, along with a whole lot of yellow squash, zucchini, Red Russian kale, rainbow chard, cucumbers, basil, and lettuce mix. We’re processing again next Monday, and we received our first restaurant order today, from Red Stag Grille at the Grand Bohemian Hotel. They’re trying a new recipe featuring our chicken for the week, starting on Wednesday, so go on and get gussied up and treat yourself to a fancy dinner at Red Stag!

We’ve also added a new well near our office apartment. We were able to live with having to get potable water for ourselves elsewhere, but when Graham was installing our shower, he had 6-year-old metal peks joints breaking off in his fingers, because the water from the hand-dug well we had was so hard.

And our biggest infrastructure project so far is underway as I write. A wedding present and farm investment from Wendy’s parents (Thanks Mom & Dad!), improving the road on our property. I’ll leave you with a video of an awesome excavator tree take down, and an after-shot of the exact same spot only a day later!  Keep an eye out for a couple posts coming out… on Wednesday, I’ll be posting the first of our Meet your Meat series about our Freedom Ranger chickens, and as soon as it happens, I’ll post pictures of the piglets we’re anxiously awaiting! Also, keep an eye out for our “advertorial” in this week’s edition of the Mountain Xpress! 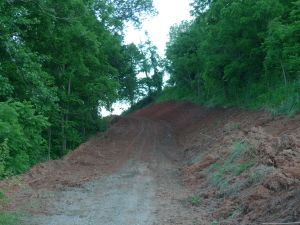